An environment that supports, encourages and motivates. 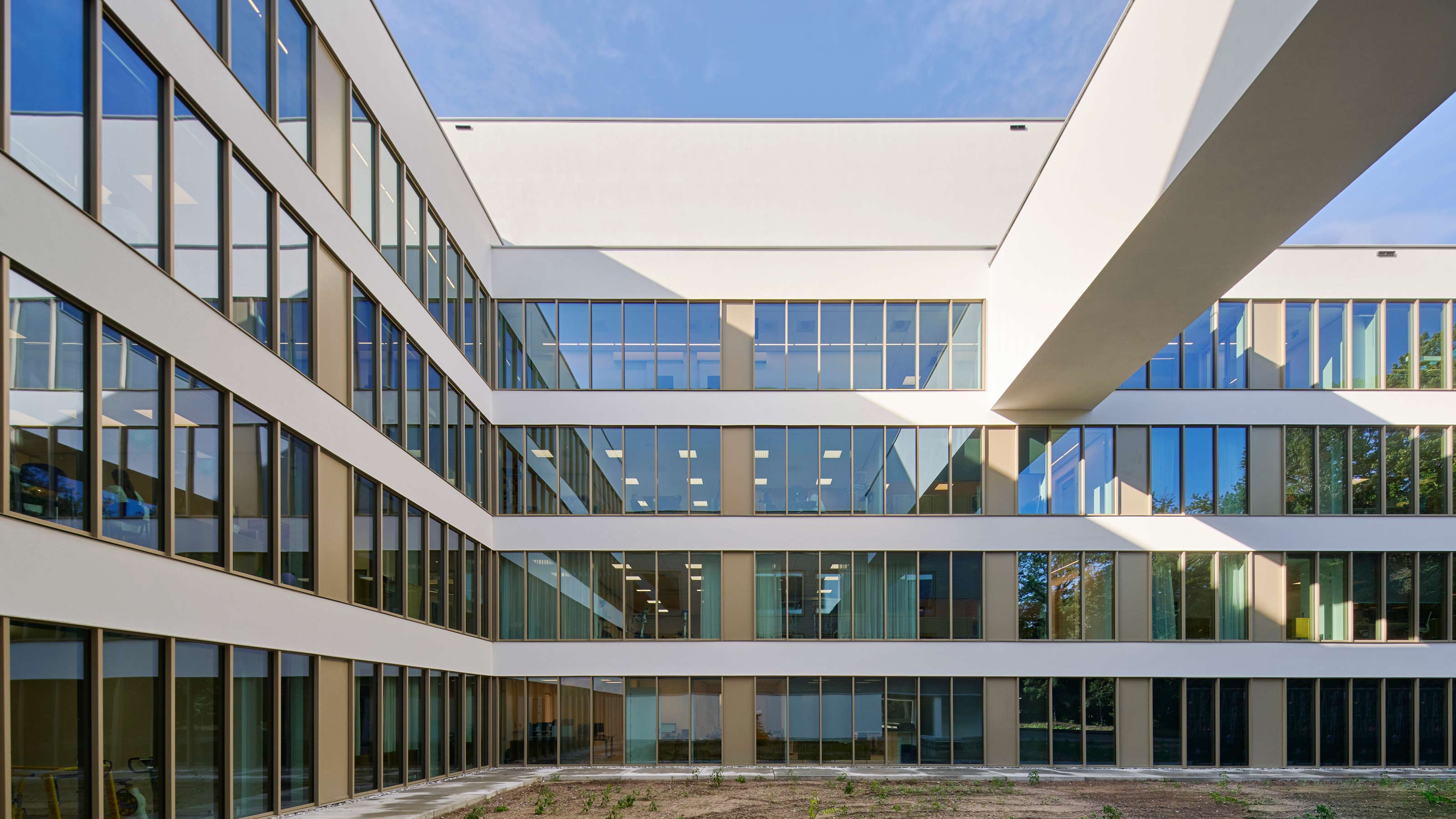 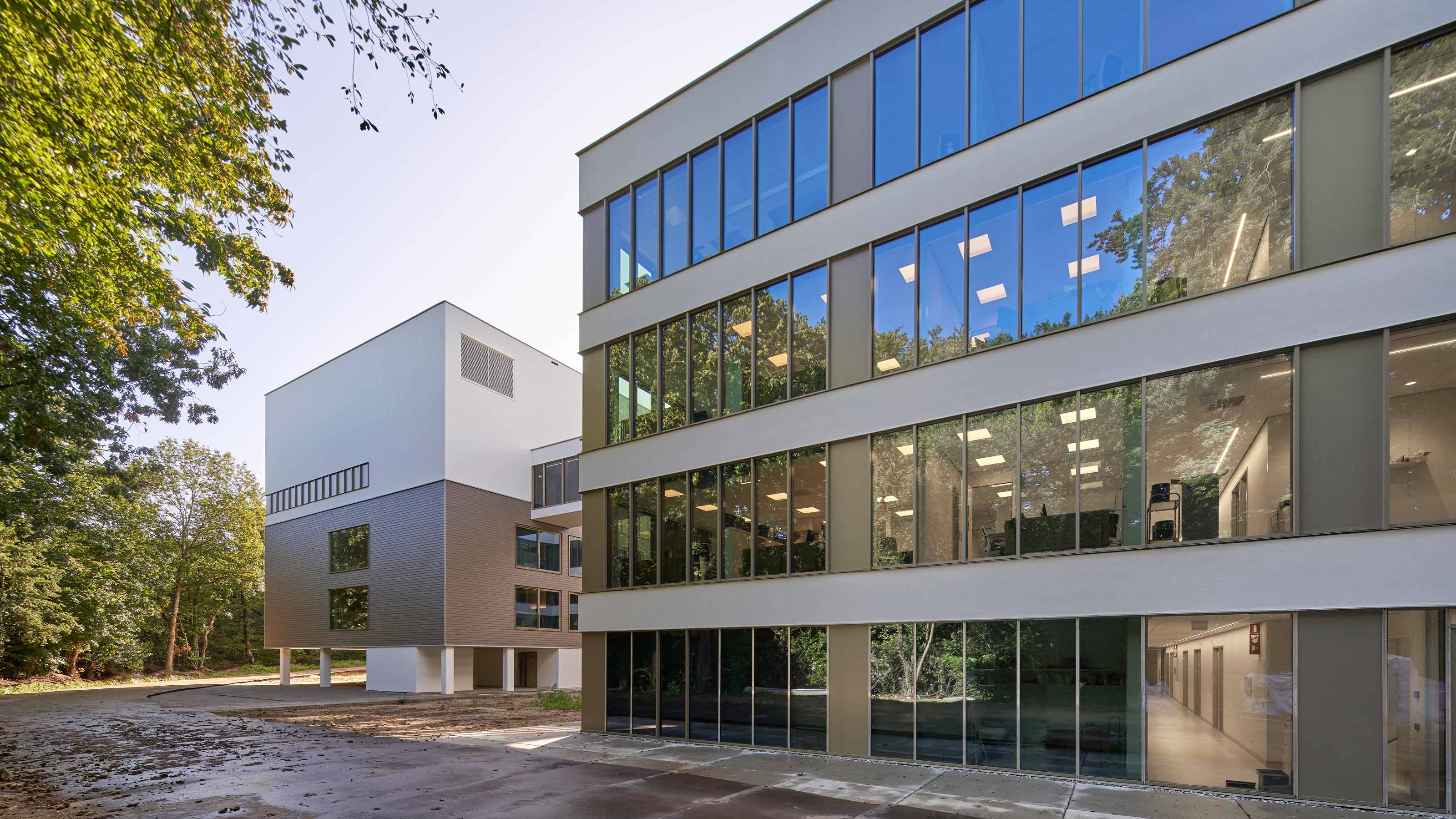 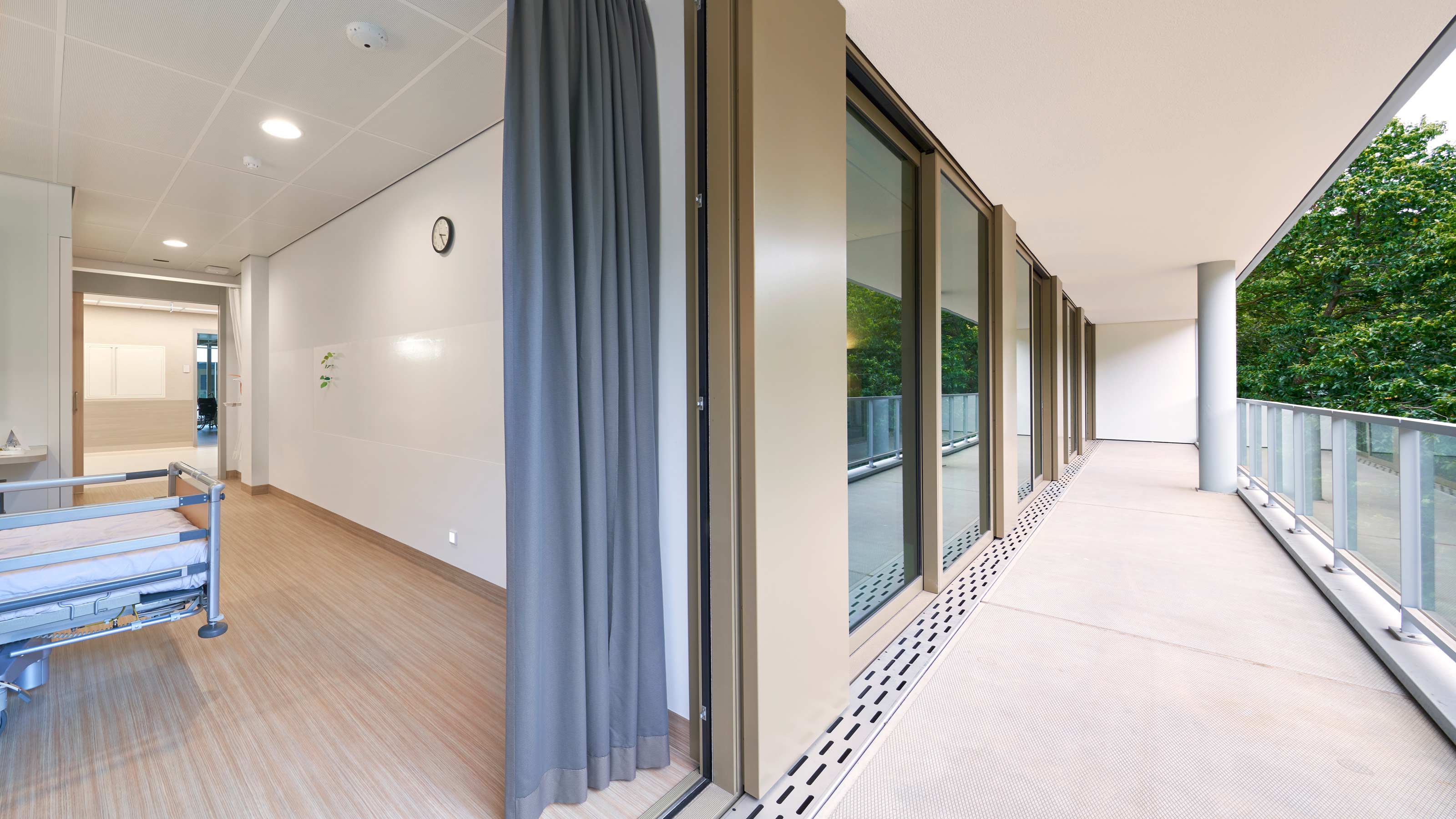 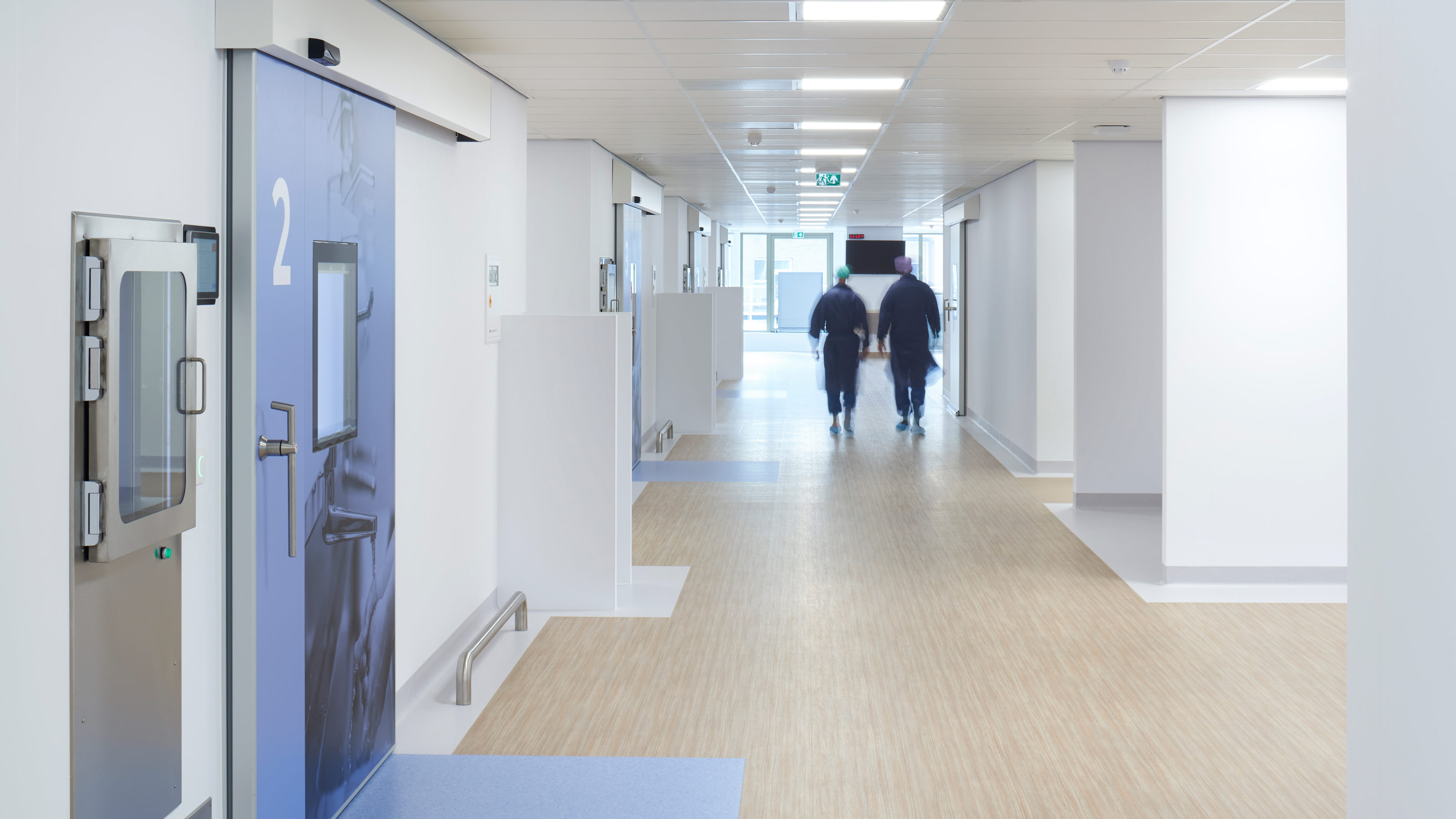 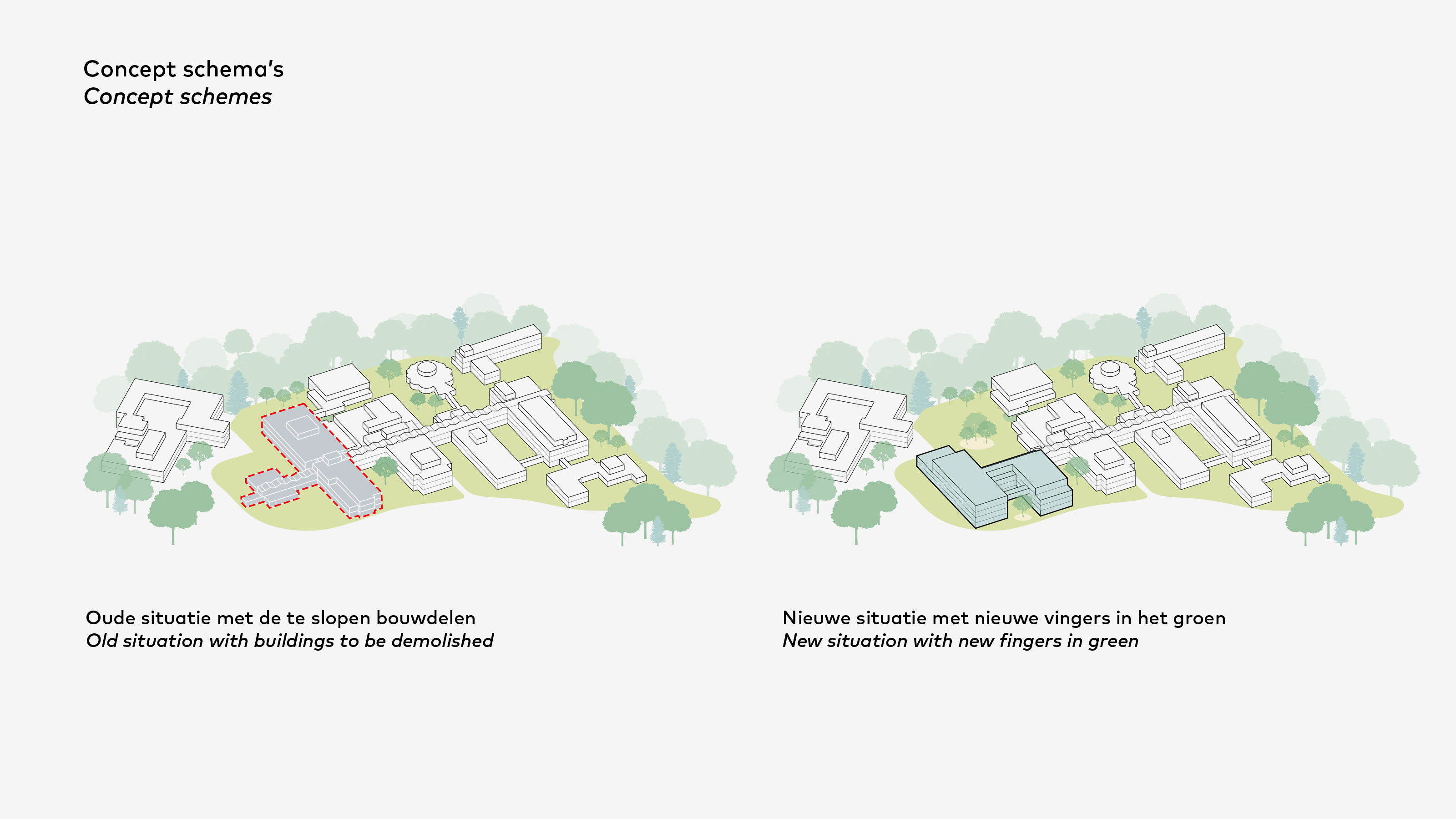 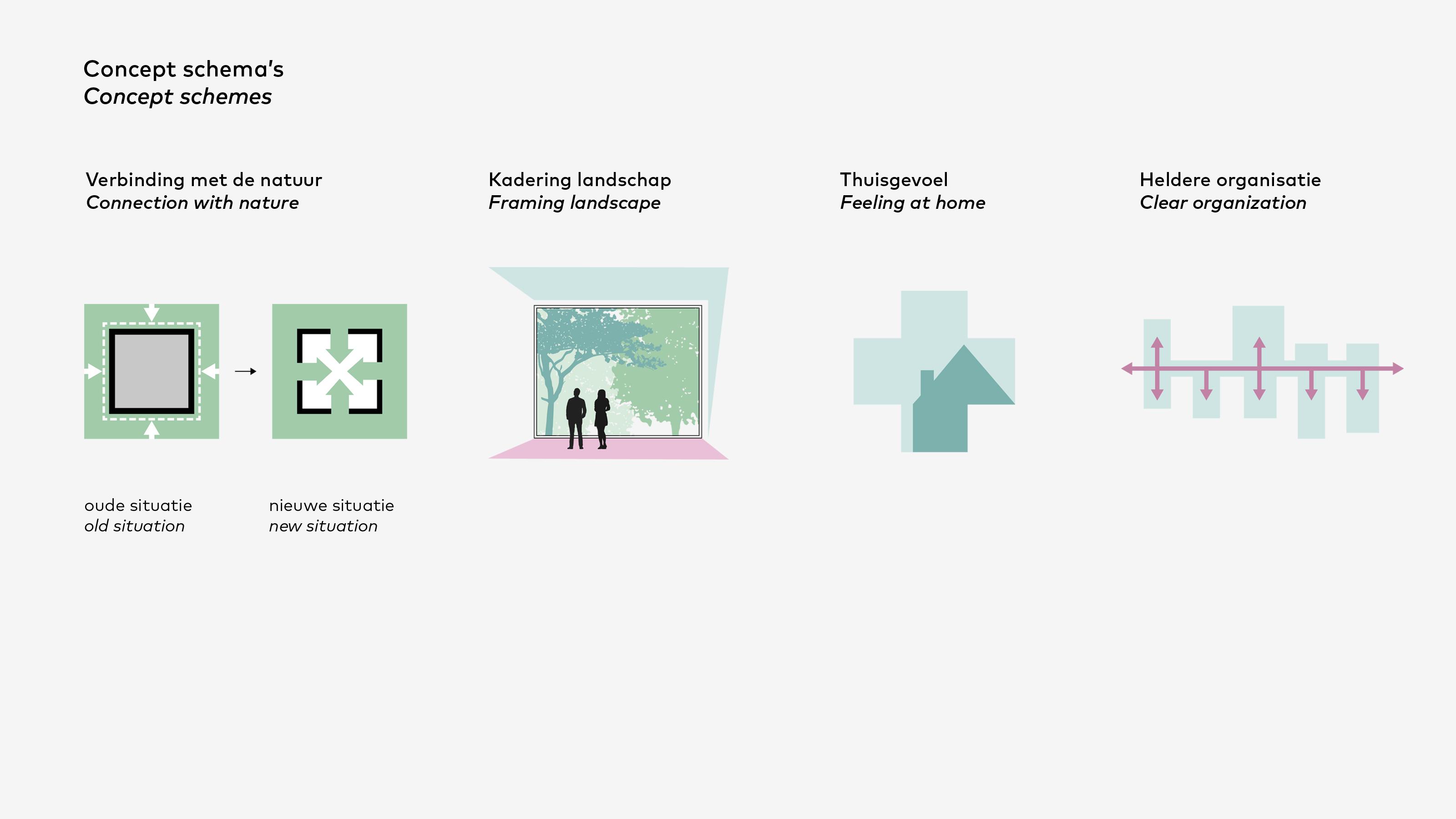 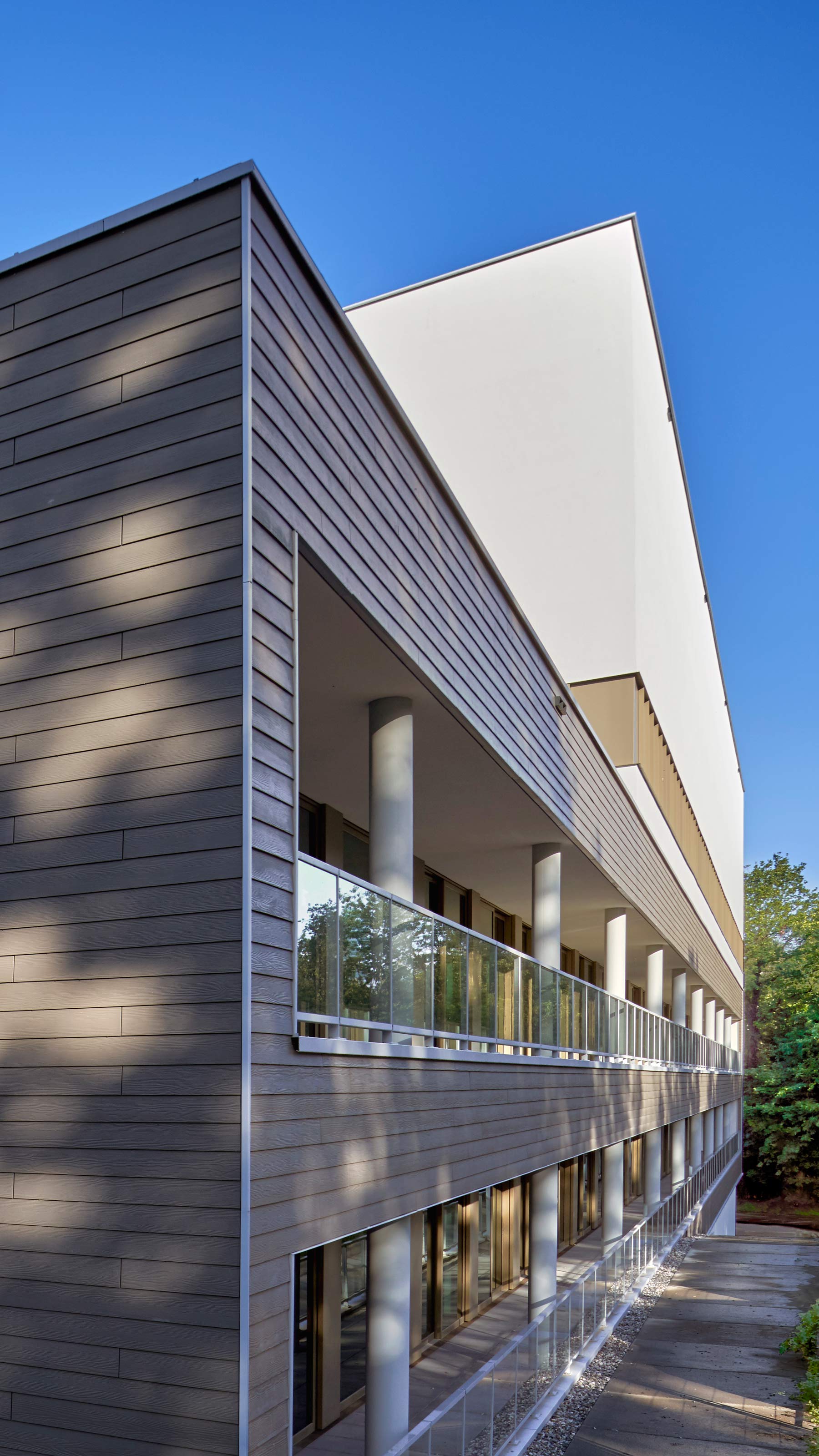 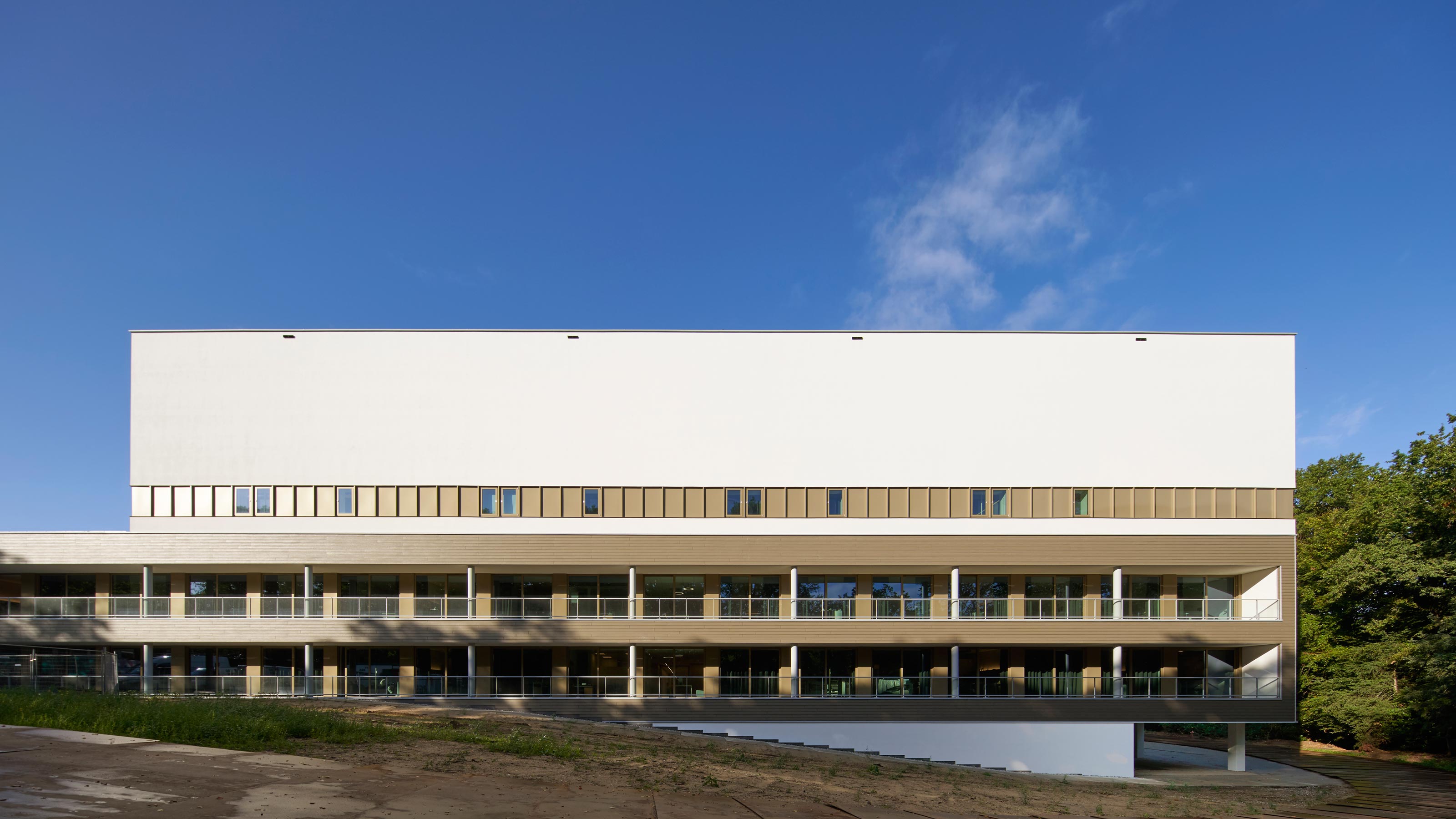 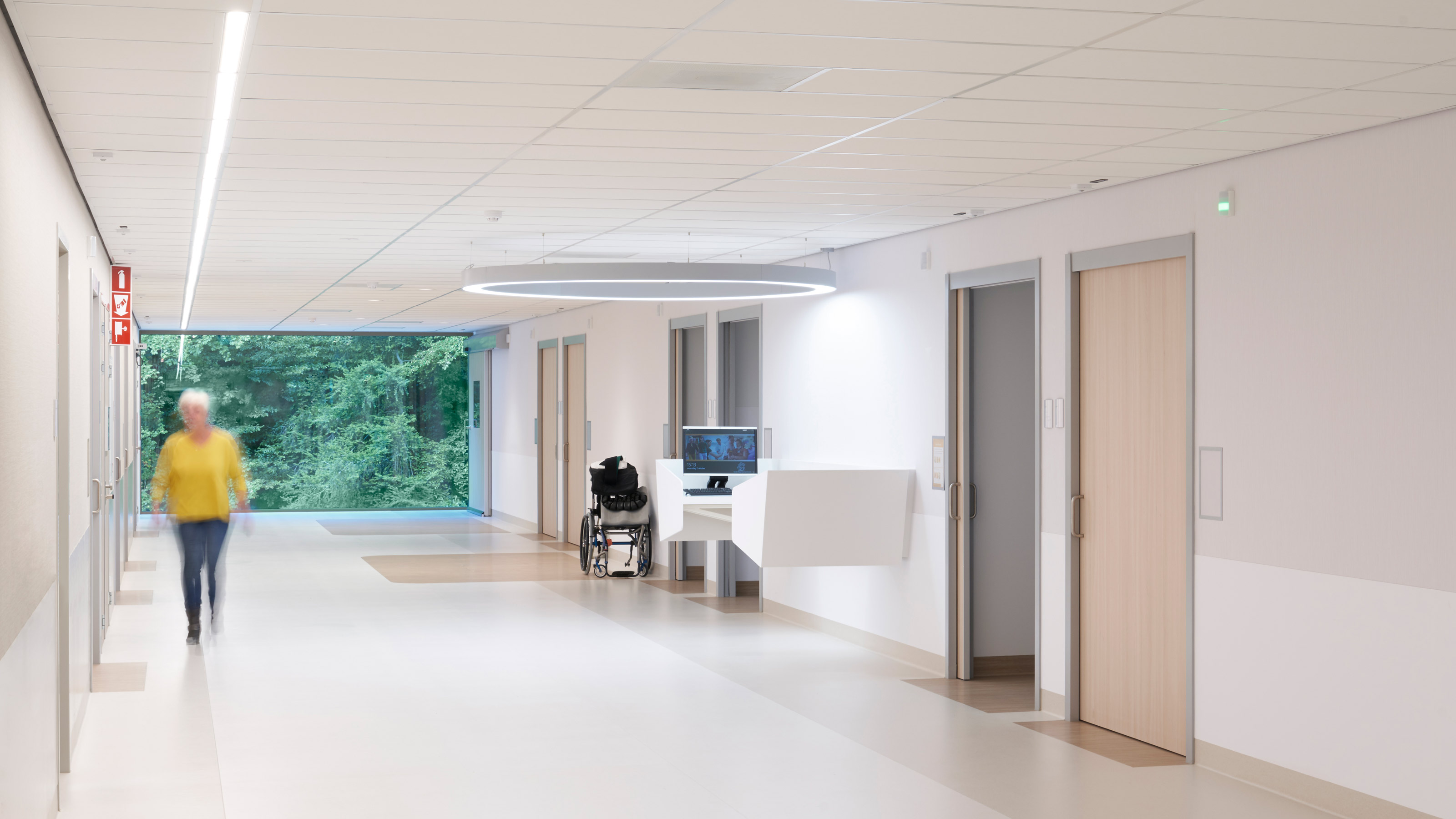 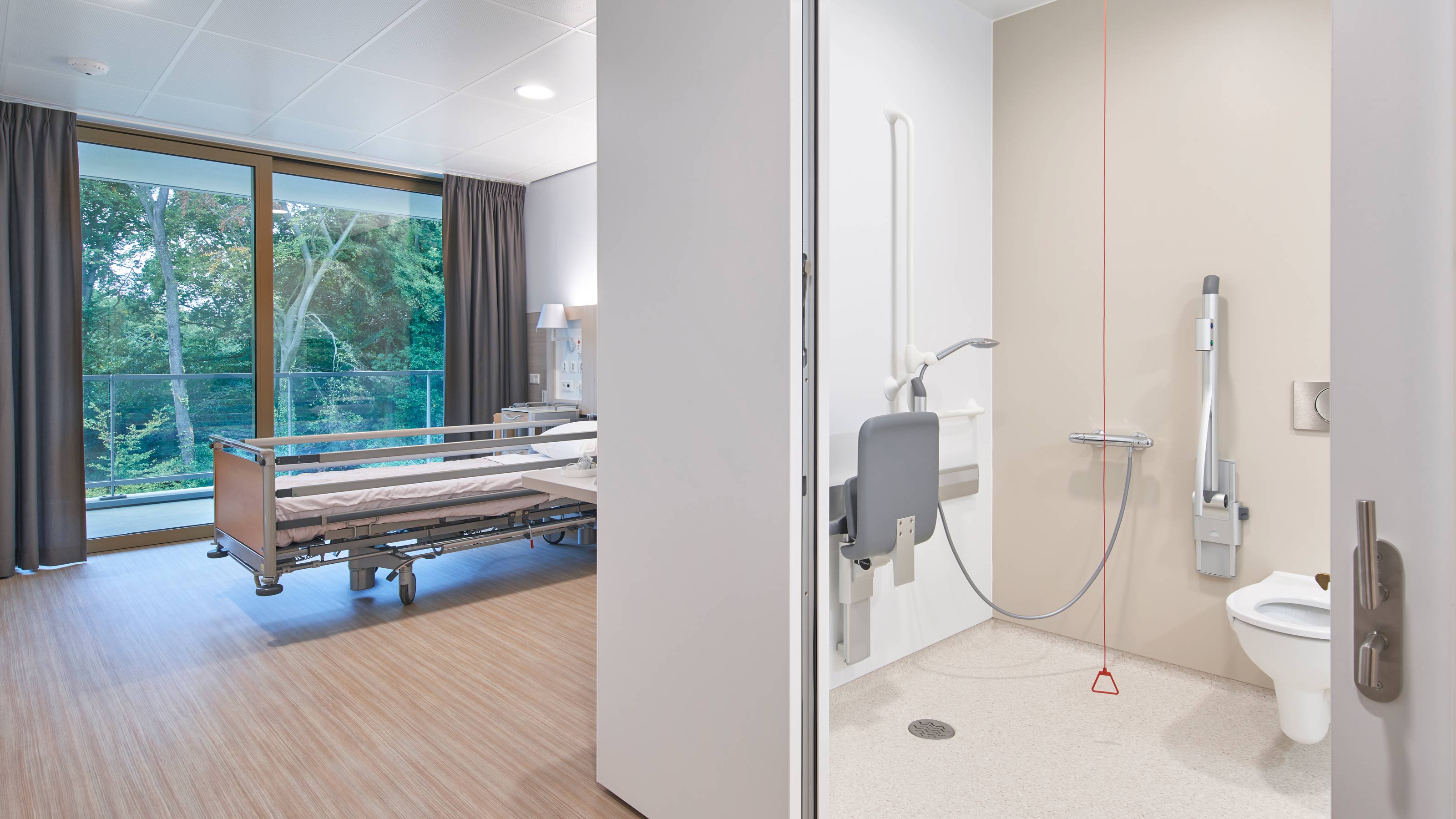 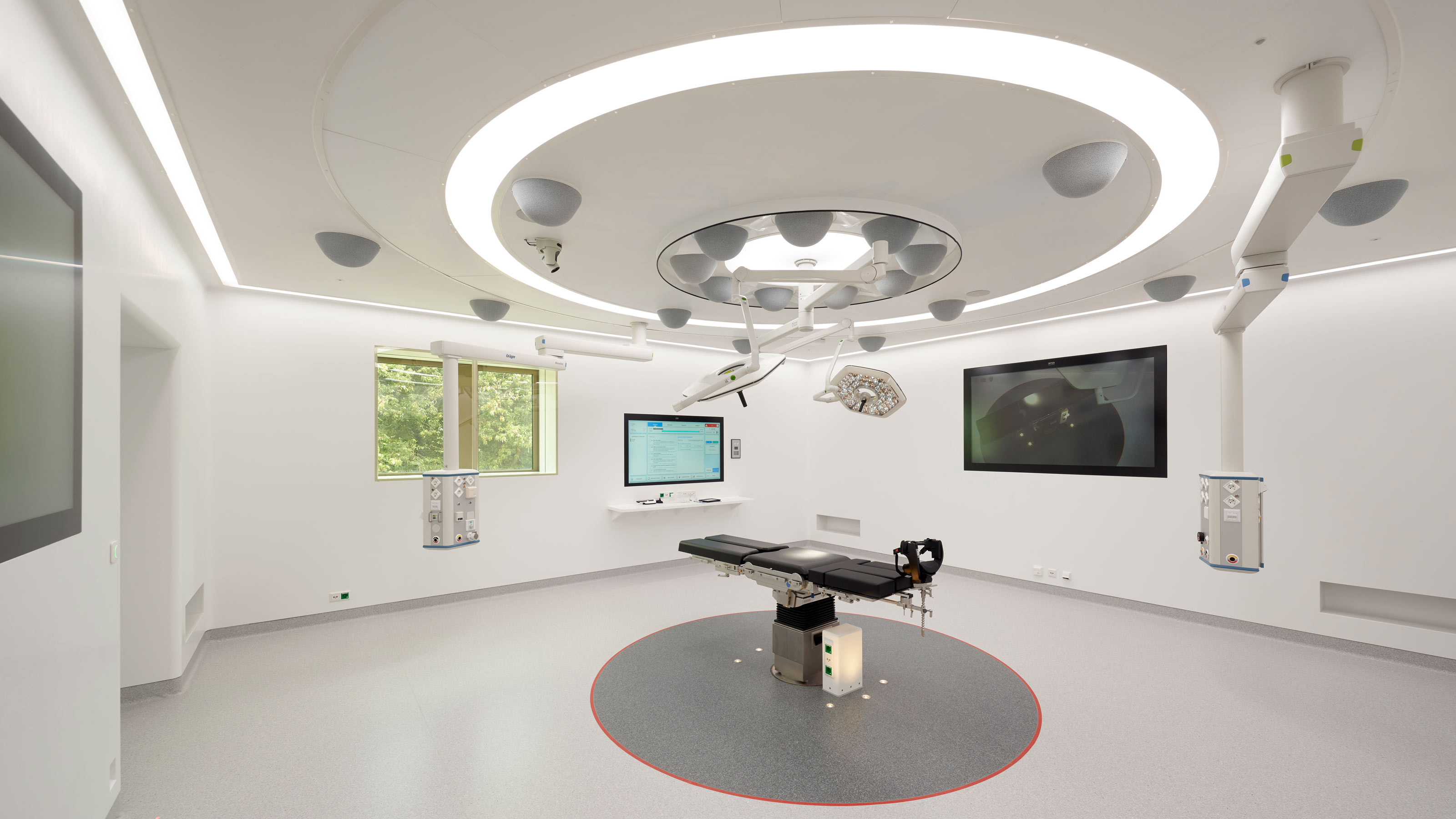 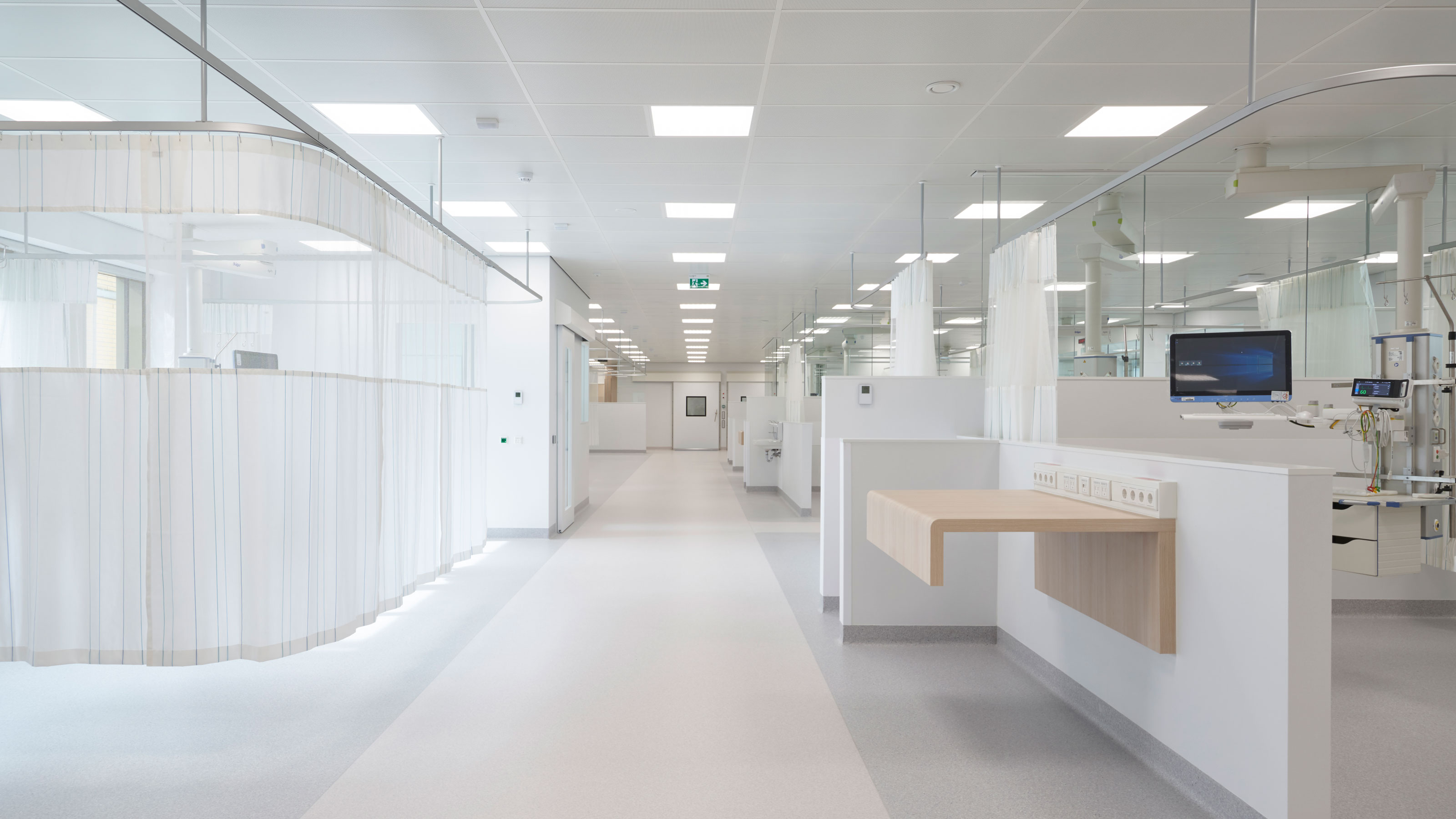 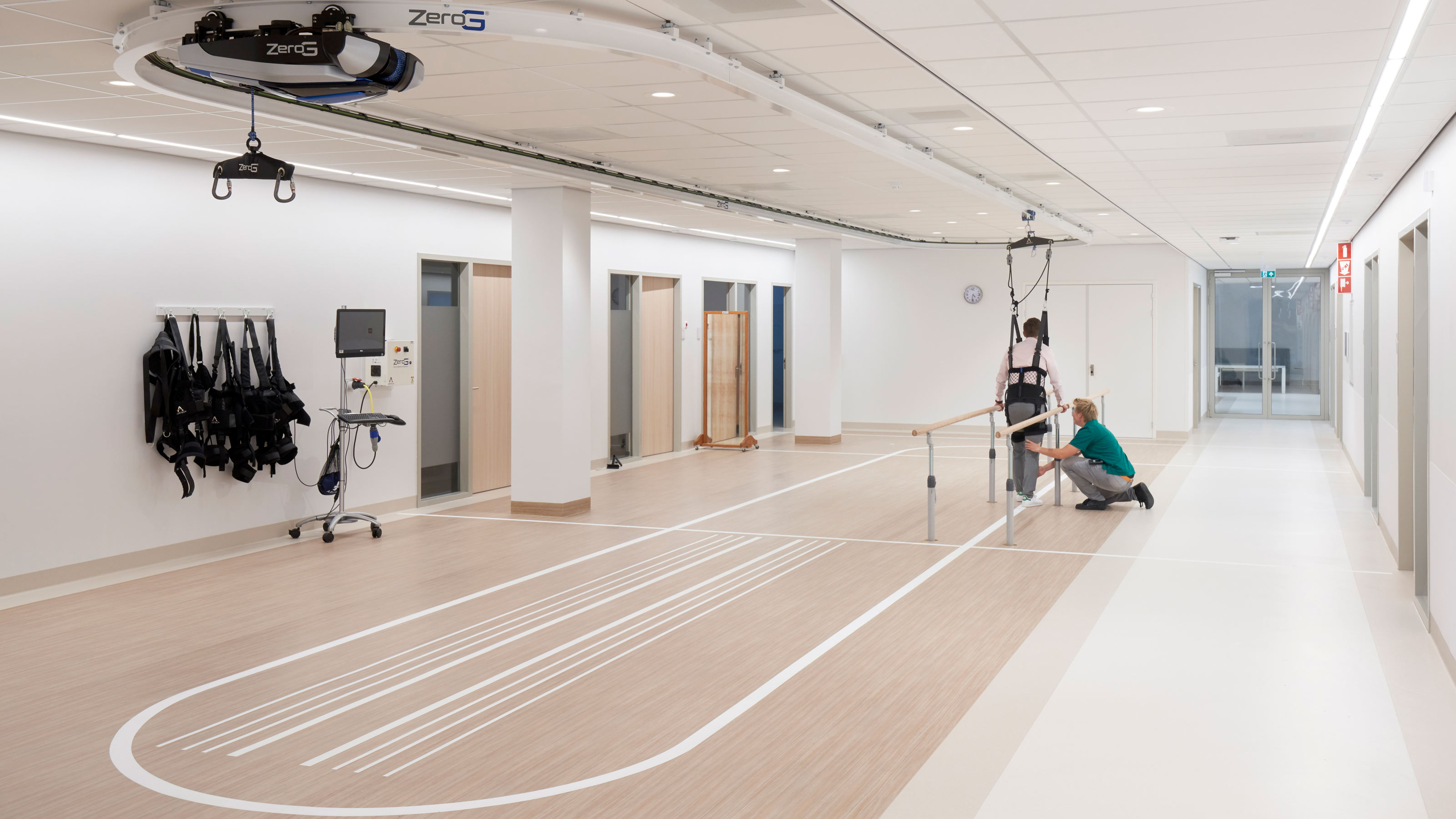 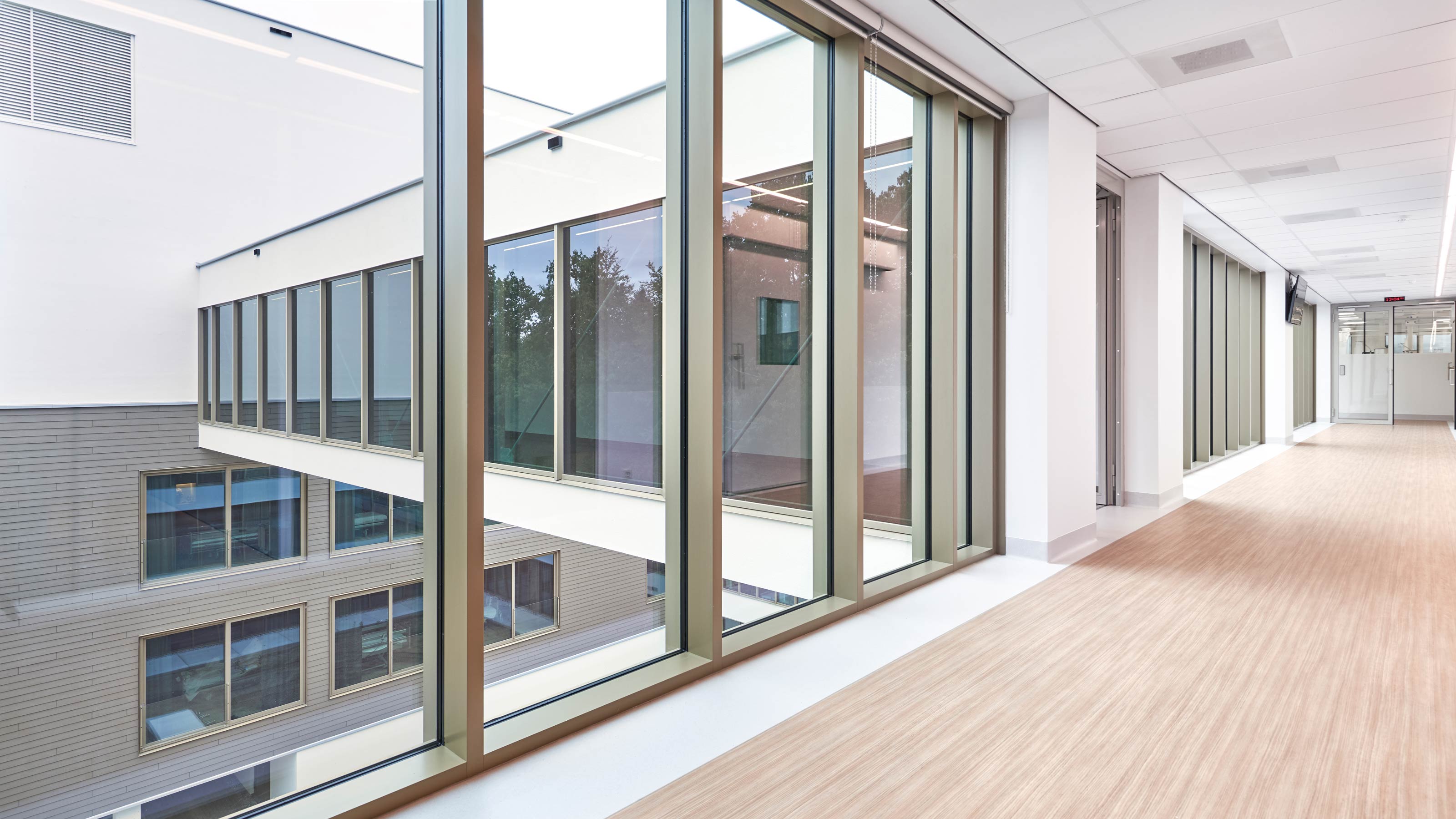 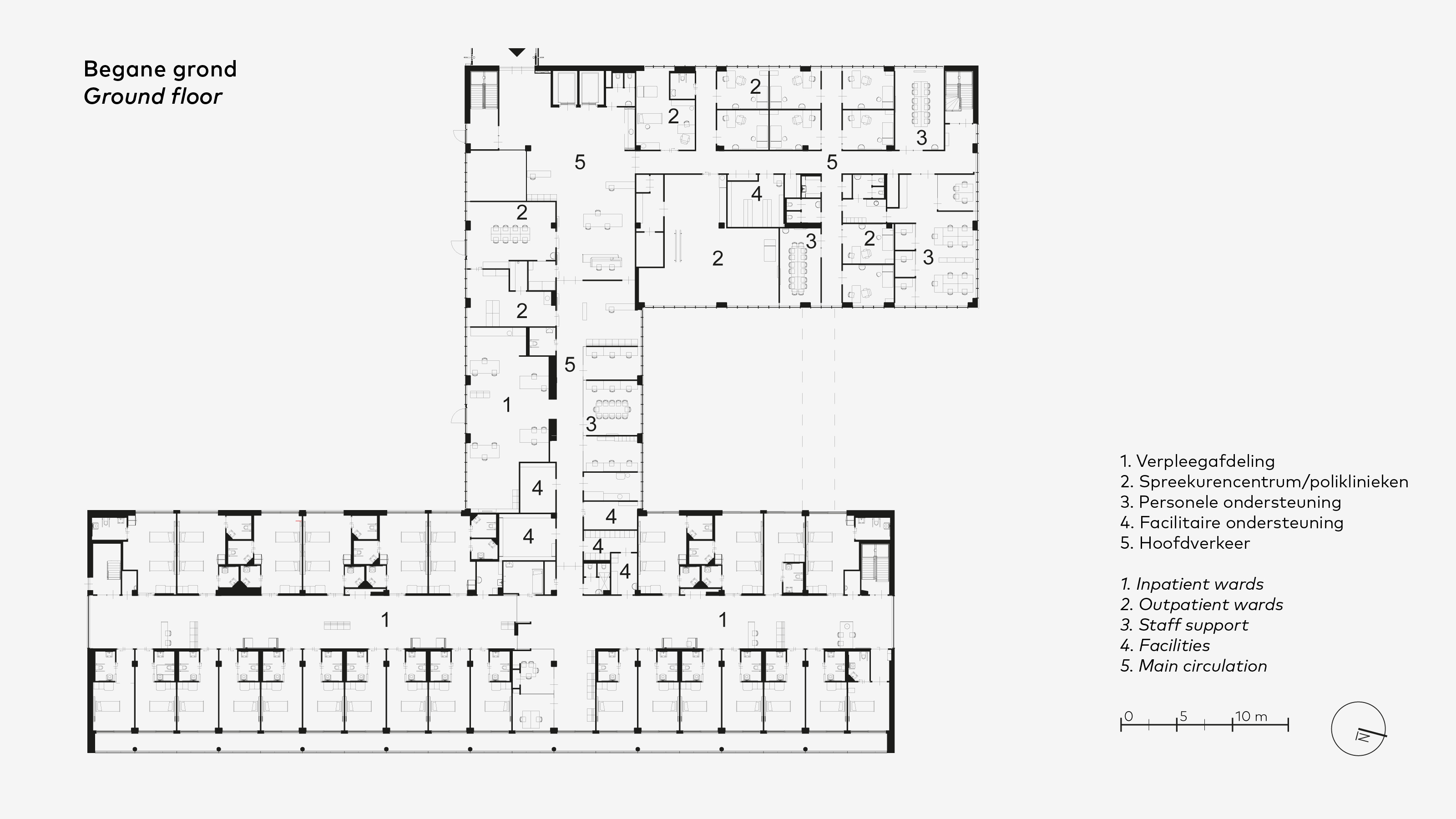 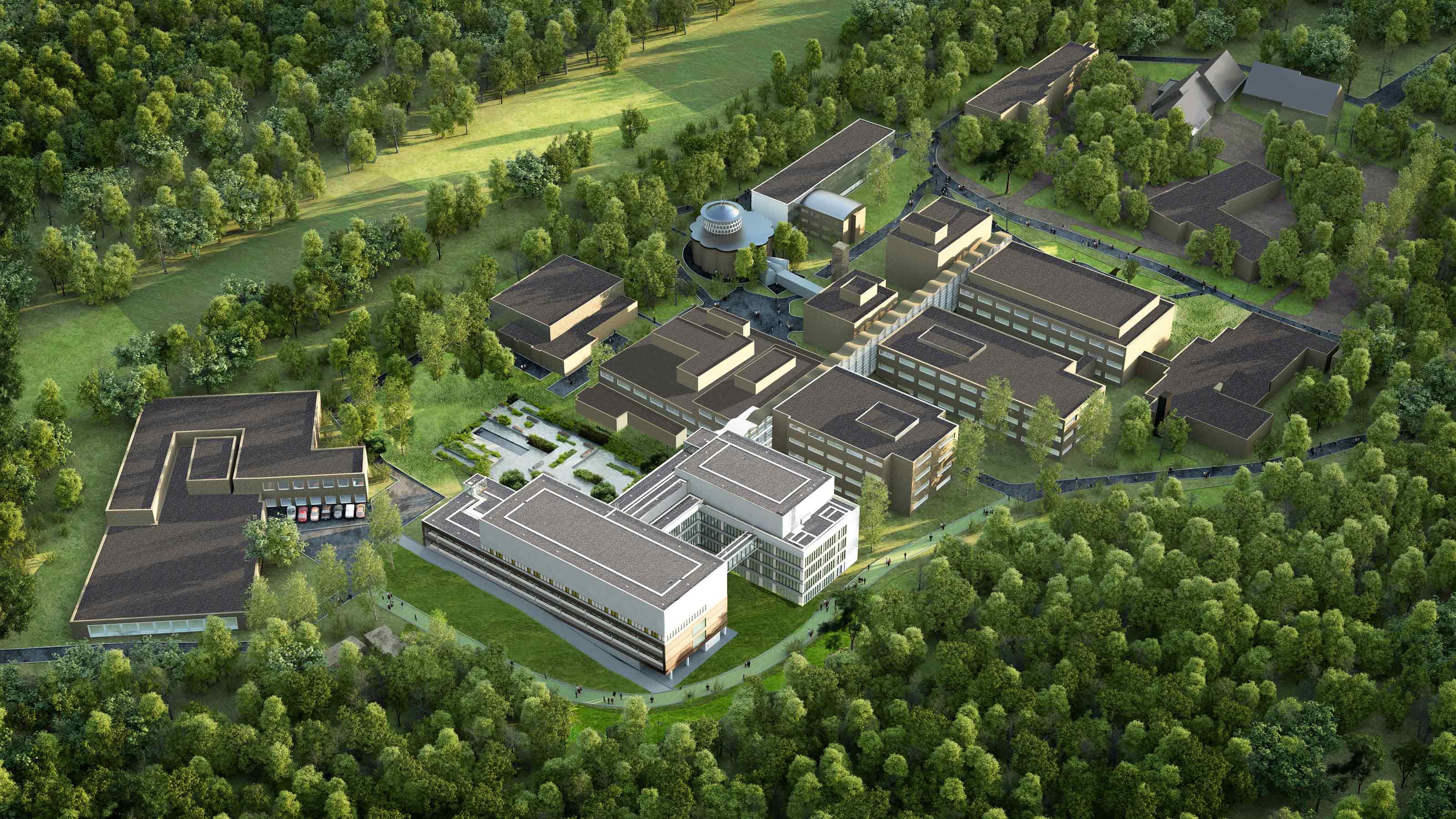 Sint Maartenskliniek lies just to the east of Nijmegen, set on a hill in green surroundings. This leading international hospital specialized in the treatment of diseases affecting posture and mobility. Ever since 1936, the hospital has been building a strong reputation based on its core values: care that is excellent, innovative, human-centred and entrepreneurial. After many decades of growth, it was time to once again underline and strengthen these powerful values, also in the form of a building. Initially, EGM architects was commissioned to renovate the specialist hospital. But when it became clear that a new building envelope, made possible by phased demolition, would result in a smaller volume and more greenery, the commission changed to new-build in 2016.

The concept for the new volume is based on openness, nature and dynamism. The volume and its immediate surroundings inextricably comprise the project. As a result, the hospital makes optimal use of its site on the green site, which becomes an integral part of the healing environment created inside.

Two volumes at the end of the existing central axis have been demolished and replaced with new volumes. The new extension enlarges the double-finger structure on both sides in a logical manner. Each of the three fingers of the H-shaped floor plan is four floors in height. The oblong volumes are positioned partly on sloping ground. Some ten to fifteen percent of the built area has been given back to nature. As a result, at the end of the project there was space for a 3,000-square-metre wheelchair-accessible exercise and therapy garden. Reducing the building volume was made possible by the creation of multifunctional rooms. This flexibility increases the efficiency of the polyclinics and exercise areas. A special app offers staff insight into the availability and possibilities of the spaces.

The new volume houses the Gait Expertise Centre (GEC), the nursing units for paraplegic and neurological patients, the rehabilitation unit and the OR complex.

Visitors who enter the central reception area on the ground floor enjoy views on all sides of, among others, the adjoining rehabilitation garden and greenery behind the polyclinics and patient rooms.

Located in the basement under the reception area is the GEC. The centre caters for people who have difficulty walking, standing and balancing themselves. Innovative aids such as the Zero-G, the exoskeleton and the Grail are grouped in the spacious rehabilitation hall.

Located on the ground and first floors are two hospitalization units, each catering for long-term stays of up to six weeks. Here are living rooms, spaces for group therapy, exercise rooms, consultation rooms, examination rooms and 72 beds in single and double rooms. All patient rooms are very large and suitable for wheelchair users. The rooms are fitted with domotics, wheelchair friendly storage units and spacious bathrooms with double doors. Moreover, accessibility and user-friendliness are optimally geared to both patients and staff. A sliding door in the patient rooms on the long side of the building offers direct access to a wide balcony that extends the whole length of the building. The corridors inside are five metres wide so that beds and wheelchairs can easily pass each other. A window that fills the full width and height of the end of the corridor lets daylight flood in. The window draws the gaze outdoors and lets nature enter, and occupants feel they can almost touch the gently swaying leaves outside.

Most modern operating rooms in the world

Situated on the 2nd floor are the new operating rooms (ORs).  All ORs measure 55 square metres, twice as big as their predecessors and are now being used. They are safer, uncluttered and equipped with the latest digital innovations. All ORs, seven in total, contain the innovative Opragon air treatment system that makes the entire OR sterile, produces less noise and provides a more pleasant temperature. The walls are completely seamless, reducing the chance of bacterial growth to a minimum. In addition, the walls are mixed with positively charged titanium dioxide particles, which repel dust, bacteria and fungi. All ORs have three large screens, seamlessly integrated into the wall, which always give the surgeon a clear view of the images that are necessary during an operation. This also means that there is fewer equipment on the ceiling. This in turn has advantages for sterility and for the concentration of the OR team. The colour of the light in the ORs changes with the daylight outside during the day. That is nice for the biorhythm of the employees. In addition, every day direct light enters through the windows and the colour of the lighting can be adjusted. For some procedures, for example, green light or blue light is useful because of the contrast. Orthopaedic surgeon Koen Defoort from the clinic is very positive:

If I list all the functionalities of our new ORs, I dare to state that the Sint Maartenskliniek now has the most modern OR complex in the world!

The entire new building avoids a hospital atmosphere. After all, patients here are not sick but recovering. The atmosphere of a hotel, with more comfort, calmness and a positive domestic feel, enhances that process and reflects the healing environment philosophy. The sleek white plasterwork with fenestration set in dark-gold frames on the exterior has a luxury appeal, giving the aura of a villa in wooded surroundings. Peace and space is the motto indoors, allowing staff to work optimally and patients to recover in a stimulus-free environment.

The new volume was designed, built and opened within three years, and can be justifiably called a healthy building. The nursing units are open, transparent and motivational environments that stimulate the independence of patients and offer maximum support for care professionals. Plentiful daylight, natural materials, a modest colour palette, views outdoors, long and serene sight lines and contact with nature contribute to a healthy building.

A hospital were connectivity and ...