The high functional and architectural qualities of the design contributes to prestige and good business of the Martini-Klinik. 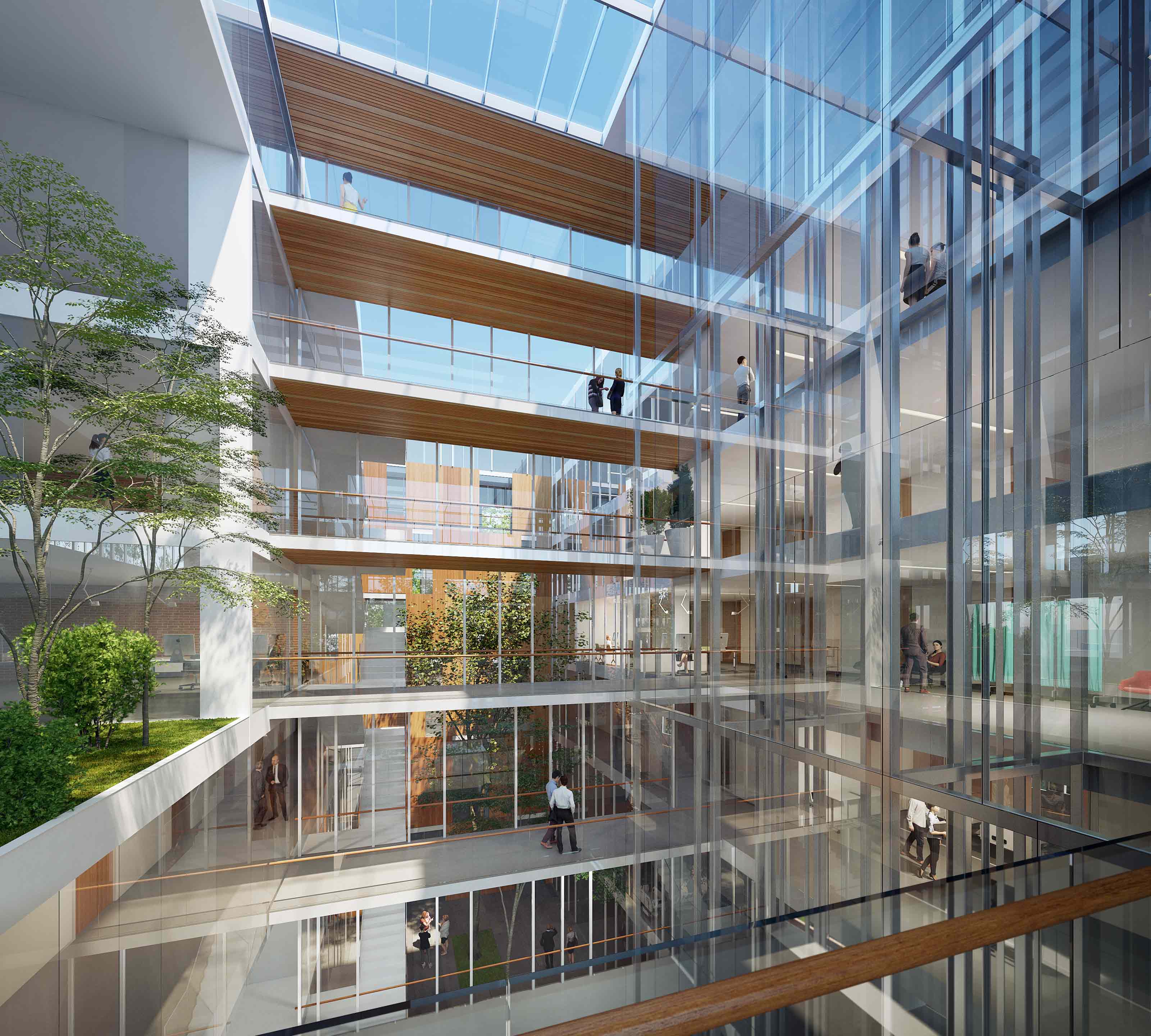 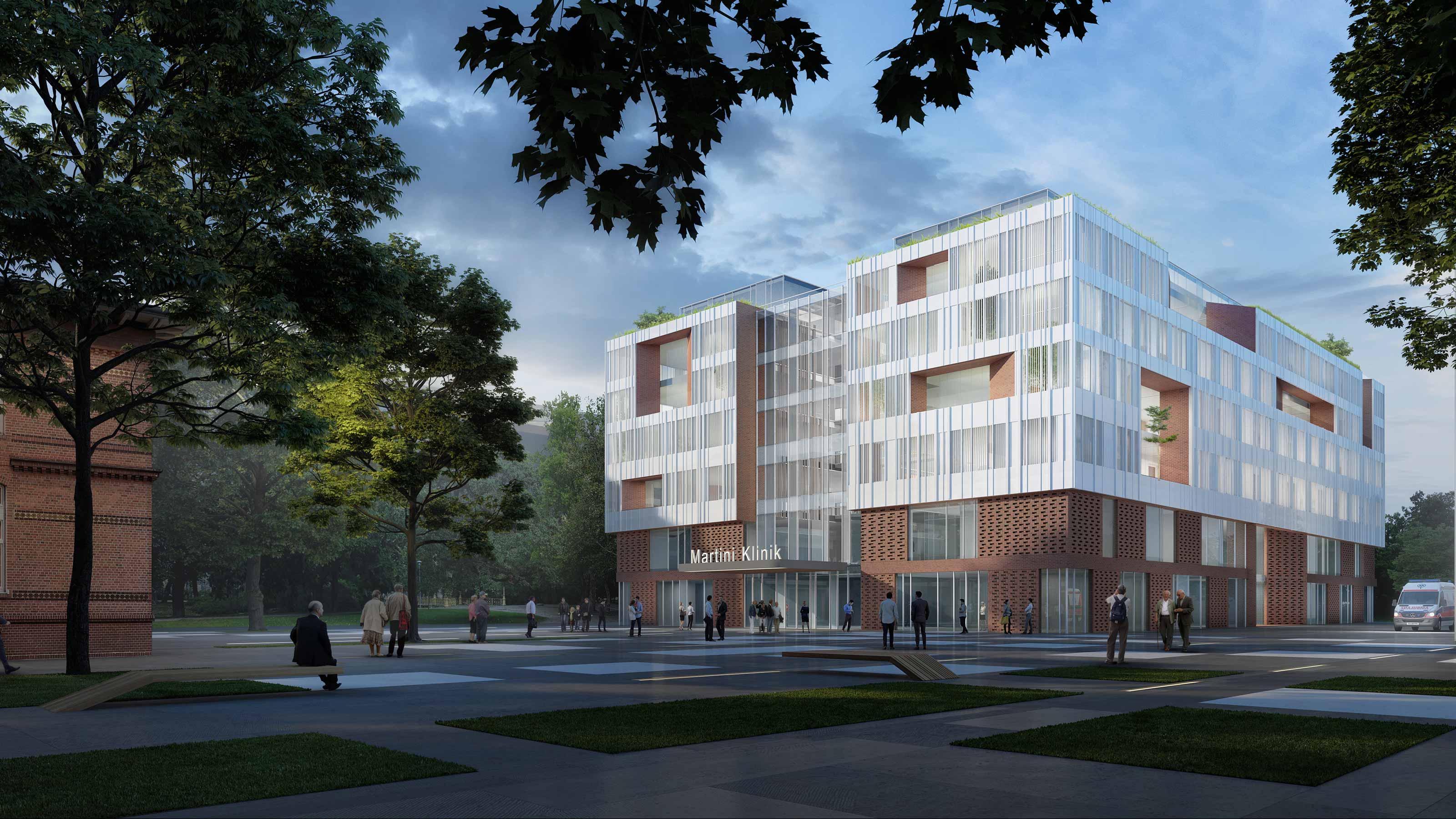 The design for the new Martini Klinik in Hamburg aims on providing it a contemporary architectural expression which enhances the clinic’s own identity while making it part of the existing campus atmosphere at the same time.

The building is divided into two optical sections; a lower part of dark colored stone with horizontal lining and an upper part with light colored metal sheets with vertical lining. For the first two floors a red brick façade is introduced which connects to the surrounding buildings by material, color and scale. The bricks are applied in a creative way; texture, color tone and position vary to achieve a dynamic expression.

The upper floors have a façade of white colored metal-sheets with vertical mullions and large ‘cut-outs’ to decrease the scale of the building. The surfaces of these ‘cut-outs’ which are perpendicular to the façade are made of red brick to ensure architectural unity. The division of material and color also represents a functional division inside the building; the ‘hotel-like’ functions (wards) on top of the ‘factory-like’ functions below (Operating Rooms, ambulances).

The building footprint makes maximal use of the available building plot. This not only enables an optimal functional organization but also allows the introduction of open spaces. This is the very essence of the design; a light and airy atmosphere throughout the building. This is achieved by creating a large space that runs centrally through the building from the West to the East side of the building. This large space is divided into several different areas consisting of atriums, winter gardens and an outside patio garden which define varying architectural domains within the building volume. It is the spatial heart of the building that provides unobstructed vistas to the inside as well as to the outside.

On both sides of this spatial heart are two functional areas which divide the functional program into obviously organized departments. Because of this concept all functional rooms will have daylight and views; either at the outer facades towards the surrounding area or at the inner facades towards the atriums, winter gardens or patio garden. These areas will have greenery which will not only provide the building with a healing environment atmosphere but also contribute to a ‘low-tech’ sustainable energy performance.

The overall experience for patients and staff at the new building will be of exceptional quality and comply with the international renowned status of the Martini Klinik.

The functional concept can be described as ‘lean and direct’ enabling the Martini Klinik to operate this building with the speed and agility of a Porsche. The main logistical structure is clearly organized around the central open space providing short distances and clear orientation.

All departments are connected to centrally located elevator cores; one for visitors, patients and staff next to the main entrance and one for logistics at the other end of the building. This scheme will ensure efficient operation of medical and logistical processes.

The central position of the elevator cores enables two sided access which benefits logistical flows within one single department (OP/Komfortstationen) or within multiple departments (Ambulanzen/Allgemeinpflege) at the same time.

The building structure provides floor areas with only few structural elements which enhances functional flexibility; partition walls can easily be replaced and the functional areas can be adjusted to accommodate future changes without encountering structural limitations. The design also anticipates the planned future extension at the North-East side of the building.

Our knowledge and skills of hospi ...

Getting well in a building that s ...